Travlyn for fun always throws up a few unexpected tastes and running repairs.  Ray Ban let me down badly as we exited Brazil and got flown in to Peru minus tbe screw for my frames.  However, the trusty bag tie is doing a handy job, and looks funky while doing it…..so Tip……bring toothpicks or bag ties as well as sewing kit on next trip.

Lima was a totally unknown quantity and although only a short stay in the capital, we enjoyed our guided city tour and became very excited for them gaining entry in to the World Soccer Cup after beating historical rivals Chile. 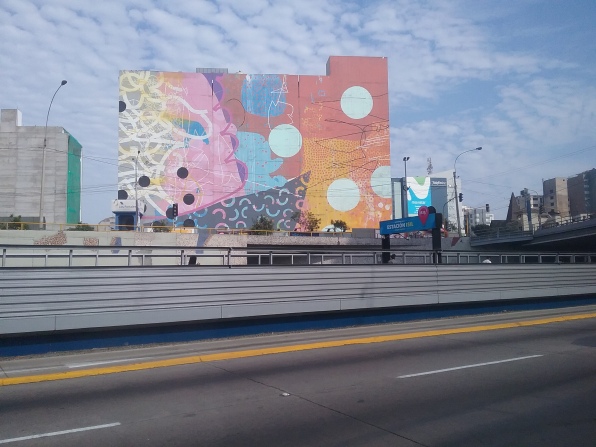 Such civic pride in the old Spanish architecture which dominated the centre.  There is the special heritage symbol on the buildings are meant to be left intact in case of attack, restoration and use of major European styled edifices for public administration, Presidential Palace etc.  Super clean and well financed. 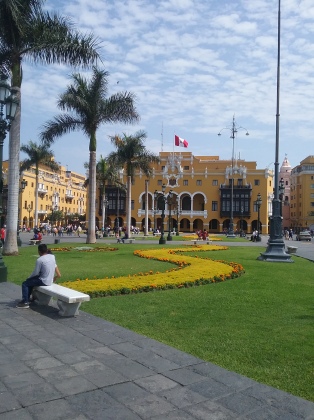 San Franciscan convent/monastery was a mine of the devine and historic.  The HUGE but beautifully manucsripted choir books needed special revolving solid, high carved stands to hold them.  The Reubens (or his students) paintings were unscathed, the cathedral was rather refreshingly unadorned and the underground catacombs yielded a glimpse in to the times of mass unmarked burials, the diseases that resulted and the societal treatmemt of the commoners.

We were pretty lucky to be booked in to a boutique hotel in Mira Flores, a well-heeled suburban district, so we managed a tour close by the only pyramid to survive the wealthy families’ land and commerce expansion in the city area. 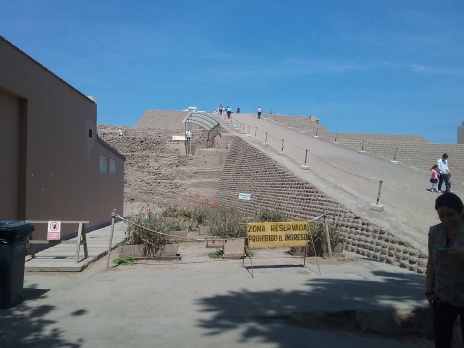 Its mummification process (pictured) was quite different from other cultures we have encountered, so it was fascinating to visit this site – Huallamarca.  Lttle is known because of the lack of written records, but the restoration has unearthed some objects such as the marine shell which were precious – more so than silver or gold, and traded widely.

Only a couple of blocks from the handy hotel, we wandered in to the Sunday afternoon leisure activities of the city’s Central Park.  The snack food, the heated exchanges of soccer card collections, music, families playing and street and art stalls.